When treating a pain patient or an eye patient, AcuNova is the first choice. AcuNova can be used together with the other seven methods, and the different methods can also be used in pairs; z. For example, AcuDNA can be used with AcuStomach for the treatment of hereditary stomach and intestinal problems. This is what you learn during your training in Boel Modern Acupuncture.

Healthy people have many goals – the sick person has only one!

From my 18th to my 38th year I had a headache every other day. I also had migraines every week, and although I had tried all sorts of medical treatments, I had resigned myself to spending the rest of my life with them.

The headache could be partially suppressed with medication, but migraine could not be cured by conventional medicine.

Luckily, I’m naturally very open-minded and take everything easy, so when the migraine was over, life went on.

At the end of the nineties, a former colleague from the speaker industry, Sören Markvor 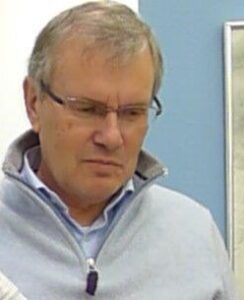 sen, started piercing needles into people when they had various illnesses. After gentle convictions of several mutual friends, my wife, Bodil, and I went to Thisted, a small town in Denmark, to visit Søren and his wife Kirsten. I could feel a migraine, so I was an easy victim when Sören asked if I would like to try acupuncture. I was very scared, but Sören stuck a needle in each hand. It was as if the world stopped.

This experience made me decide to become an acupuncturist. That’s exactly what I became and later I developed a new acupuncture method, AcuNova, which is described in a book. The book is called “The Medicine of the Future”.

We have called the new method Acupuncture 2000. Later we changed the name to AcuNova because many thought it was the same as Chinese acupuncture.

I am not a theoretical scientist. My access to knowledge is to examine things – to grope and find out how things work on the way. That’s what we have always done in West Jutland. Back then.

Days, even weeks, could pass without progress. Then suddenly we made many new discoveries, and many new phenomena appeared. It was an interesting time for the whole family and for the patients who have experienced one or two miracles.

At that time, I was for a while head of the largest acupuncture clinic in Scandinavia with a total of 12 employees. The doctor and other acupuncturists often asked if they could learn the new system. But I knew that if I taught them something before the research was so advanced and delivered good results, I would risk exposing them to something wrong and that they might apply it in the future. Therefore, they had to wait until we were done with the research so that we were quite sure with the results. It was a fantastic scientist, the neurologist Poul Andersson, who helped us find out how AcuNova works.

At a congress in Malaga/Spain I have met my old mentor, Professor dr. Anton Jayasuria, then rector of the Open International University for Complementary Medicine. I told him about the discovery, and he convinced me to do a written work on the new system. He invited me to give a lecture on this topic at the International Congress in Sri Lanka around the turn of the year.

That started a lot of interest. So far, more than 6,000 naturopaths, physicians and other health professionals from more than 50 countries have learned AcuNova. It is very easy to learn.

Students in the AcuNova training will learn to find the acupuncture points that are in the skin over all the joints on the body. If you hit the right spot with a thin needle, or pressing a ballpoint pen sends a signal to the part of the brain that controls the diseased part of the body.

Research and experience have shown that AcuNova is particularly effective for the treatment of acute and chronic pain, for the blind and the visually impaired.

AcuNova – effective in the following conditions:

Deafness and other hearing problems