AcuLine is an excellent choice for the treatment of acute pain, like sports injuries and organic diseases (diseases of the internal organs), possibly together with AcuKing.

When the AcuLine specialist hits the right point, there is immediate pain relief.

AcuNova and AcuLine have something in common: the acupoints lie in and around the joints. It can be said that AcuLine originated in AcuNova and in a German system. The system is usually called NPSO (New pointial pain and organ therapy), which was developed by Naturopath Rudolf Siener. 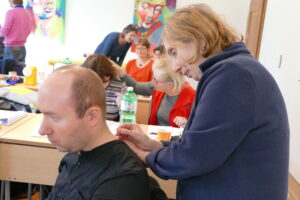 That the points are in and around the joints is a discovery that comes from AcuNova.

The diagnostic method, a so-called energetic line, comes from NPSO.

The stitching method is similar to the AcuNova special stitch method – the so-called ‘very-point technique’ or the woodpecker method, as we call it in colloquial language.

One of our German students is a doctor and specialist in NPSO. He has u. a. investigated the influence of NPSO and AcuNova on the brain and nervous system. When he saw the results of AcuLine, he was very excited. After examining it, he found a good deal of the mystery in the new system.

The following background knowledge is partly general science, partly inspired by physicians and my research in micro acupuncture systems.

Development of an embryo

Embryo development consists of a series of precisely coordinated processes. As is known, the body is formed by cell division. This development causes an embryo to emerge from the fertilized egg cell.

As part of the further development of the embryo, three simple layers of cells are formed, so-called cotyledons from the inner cell mass. These layers are called endoderm, mesoderm and ectoderm according to their location.

In all higher animals, cell division occurs. The cells form between ectoderm and endoderm in the middle mesoderm – the germinal disc is now in three parts.

The cells are therefore divided into different types with specific functions.

Ectoderm forms the brain and nerve cells, the skin and the structures that are developed by it.

In short, so-called micro-acupuncture systems have their origin in the germinal discs. Almost all work through the endoderm, as well as NPSO.

AcuNova is an exception because it works by ectoderm. The brain and the nervous system are – as is known – formed in the ectoderm. It is certainly the cause of the great success of AcuNova.

Therefore, a combination of AcuNova and NPSO involves both, endoderms and ectoderms, thereby providing a unique and heretofore unknown synergistic effect.

There are no other methods involving two different cotyledons.

AcuLine – effective in the following conditions:

Atherosclerosis in the bone

Keep an eye on our calendar for 2022 which will be updated soon!