AcuDNA is also often an effective adjunctive treatment for the blind and visually impaired. AcuNova is usually very effective for the treatment of allergies. When you supplement with AcuDNA, you usually get much better results. In some cases, we have seen patients who have lost their pollen allergy. 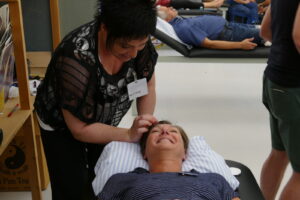 AcuDNA is slightly different than the first three methods that are in the same family. AcuDNA is a whole new kind of acupuncture. A very exciting kind, with a huge potential. Just think about the possibilities of treating genetic (hereditary) diseases.

These first three methods treat reflex points in different areas of the brain. With AcuDNA and AcuStomach we treat new aspects of the brain / brains, direct, more exciting …

Like the other Boel Modern Acupuncture methods, AcuDNA is effective in almost all diseases. But when treating hereditary problems (the physical part of psychosomatic illnesses and illnesses made worse by stress, and also patients who often have headaches), AcuDNA will typically be the first choice, although the main problem is somewhere else in the body, such as menstrual cramps, back pain or something else.

The points are in the middle of the forehead, centered in the point called “the third eye”.

AcuDNA can be used in almost all diseases but is often used with AcuStomach or AcuNova.

The brain is still being developed

According to medical science, a very interesting development is underway in the anterior part of the brain called the frontal lobes.

Scientists from around the world have done research in this area and found something remarkable. One of these scientists is the psychologist Erik Hoffmann, who studied the development of the brain at the University of Copenhagen. He and other scientists have come to the following conclusion: When the frontal lobes are stimulated, we are more focused and get more energy, better overview and greater mental clarity.

Erik Hoffmann says, “When the new brain is activated, it is experienced as awakening. The same way we wake up from a sleep. We are experiencing a level of consciousness far higher than those in the present. ”

It is a fantastic experience to see an almost apathetic patient coming out of a “cheese bell” after AcuDNA treatment.

The secret of the brain

Erik Hoffmann says, “Man has the opportunity to attain higher consciousness, but one requirement is that we add more energy to the frontal lobe.”

In recent years, several studies have documented how certain types of stimulation can increase activity in the frontal lobes. When this happens, the subjects often tell, they feel extreme clarity, and they are fully connected with everything alive. It is this condition that Erik Hoffmann calls the Higher Consciousness, which is different from the three other known states of consciousness in which we humans normally reside, namely deep sleep, dream sleep and waking state.

One of the studies referred to by Hoffmann was made by an American neurologist who measured and scanned the electroencephalographic currents of Tibetan monks during open-eye meditation and found a sharp increase in activity in the front of the brain, where above all the very fast gamma waves were dominant.

“The front part of the brain, called the frontal lobe, is already ready. There is great potential here, but it is largely unused, “says Erik Hoffmann.

The frontal lobe is a large part of the neocortex, in evolution the youngest part of our brain. It is found in all mammals but is most highly developed in humans. It is that part of the brain just behind the forehead – ready to be cultivated.

Inspired by American studies, Erik Hoffmann has developed a program to accelerate waves in the frontal lobes. For example, it is characteristic for elite athletes to activate the front part of the brain better than the average.

There are already known Chinese acupuncture points on the forehead. We also used the forehead points in our eye program earlier. One of our first German students treats vision exclusively through the forehead. There is also a German system (esogetics) based on the diagnosis of the iris, where the iris is projected into the forehead. The treatment is such that the eye socket is illuminated with different colors.

AcuDNA is to our knowledge the first acupuncture method based entirely on the stimulation of the frontal lobes.

The special feature of AcuDNA and AcuStomach is that it was developed through the inspiration of medical science. You’ll find out more when you come to AcuStomach.